She was a member of the historic – and dominant – Tuskegee Tigerettes of the 1930s and ‘40s and was the first coach of what is now the legendary Tennessee State Tigerbelles program, who would dominate in the 50s and the 60s.

This context feels important. Jessie Ellen, who was born in 1918 and passed at a date unknown to me, grew up with parents dedicated to building athletic programs and competitive opportunities for young Black women and girls.

The Tigerettes began competing early in the 20th century, in basketball, tennis, golf and track and field. And in track and field particularly, Tuskegee went on to dominate the nation, winning national AAU track & field titles and setting records, from the late 1930s to the early 1950s.

Jessie Ellen was on a team that won a national title. She participated in multiple events, but she ran the second leg of the 4x1 (400 meter) relay because she wasn’t a fast starter but she was tall. She didn’t make it to the Olympics, but as a team they set a national record that wasn’t broken until 1958.

She was hired at Tennessee State in 1943 to coach track & field and women’s basketball.

“President Davis had been so determined to hire Ms. Abbott that he drove down to Tuskegee to personally recruit her,” Salisbury writes, referencing information from Yevonne R. Smith (I can’t access the thesis).

The experience of Jessie Ellen Abbott was similar to those of women’s sports coaches even decades later. There was no funding for uniforms, equipment, recruitment, or travel. They didn’t have a track.

“Ms. Abbott’s training methods were many of these young women’s experience with serious physical training and competitive preparation,” Salisbury said.

They weren’t great at first, but Abbott's team continued to participate in the Tuskegee Relays and began to improve.

It’s hard to find information on or interviews about Jessie Ellen Abbott. She may not have liked to talk about herself, who knows if her parents being so influential played a part in that or if that was just her personality.

Even the first photo I saw of her in 2019 didn’t include her middle name or initial, which is what easily distinguishes her from her mother, Jessie S., who is also a major part of history. And once, I've seen Jessie Ellen referred to as him.

But I have hope, because when I went to Tuskegee last year, I was able to find an interview she participated in.

There doesn’t seem to be documentation of when or why Jessie Ellen left Tennessee State but it seemed to be after 1945-46 school years, and Salisbury says this lack of information is part of the reason she is not remembered as she should be. Salisbury shared a quote from an interview with Ed Temple, who said Abbott "wasn't a real coach, it was more of a club team."

But the coaches that followed Jessie Ellen Abbott built on the foundation she built and followed approaches continued she and her father developed.

“Abbott brought with (her) a commitment to excellence gained at Tuskegee Institute, home to the first nationally dominant African American track and field program,” said Carroll Van West. “Abbott’s Tuskegee model shaped what happened at Tennessee State for the next generation of sport.”

The Tennessee State coach directly after Jessie Ellen Abbott was Lula Barley in 1945. Then Tom Harris started in 1946, and continued to participate in the Tuskegee Relays and went to other competitions. He also focused on recruiting.

Just two years later, he produced the first Tennessee State Olympians. There were 1948 Olympians Audrey "Mickey" Patterson, who won bronze in the 200 meters, and Emma Reed, who qualified in the long jump. This was the same year Tuskegee's Alice Coachman won gold in the high jump.

Salisbury writes, “Abbott deserves credit for serving as the first coach for the TSU women’s track and field team. The legacy of Ms. Abbott’s service as the first Tennessee State track coach may not have resulted in anything but a few minor competitive successes, but her efforts had generated a great deal of excitement and heightened interest in the women’s track program on campus.”

By 1950, she was working at the Veteran Affairs (VA) hospital as a corrective therapist. That was when she became a registered voter.

“They would let us off from the job at the VA to go down to register,” she said in the 1974 oral history interview. “We were determined to become registered voters. So they gave us a hard time and one day we’d go and they didn’t have the…. What you call it… the number of registrants in those days. So then we’d go the next time and they were painting the room, and we just went through everything.

There is still plenty to learn about Jessie Ellen Abbott, but this is a start.

As Akilah R. Carter-Francique said in An Ethic of Care: Black Female College Athletes and Development, "The efforts at Tuskegee were not in isolation, as other HBCUs followed suit creating athletic programs at Prairie View A&M, Alabama State College, Florida A&M, Alcorn College, Fort Valley State College, and Tennessee A&I (TSU). Thus, the women of Tuskegee Institute forged a way, and the women of Tennessee State University would continue to elevate Black women in the sport of track & field." 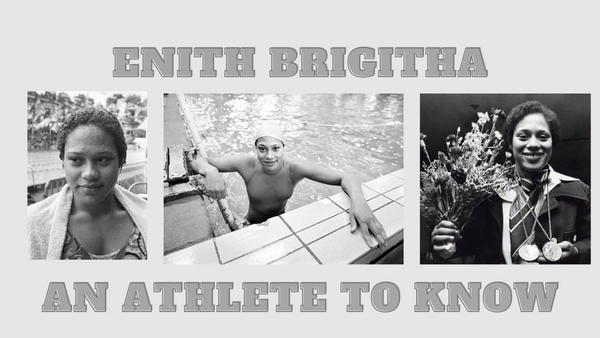 Enith Brigitha is the first Black woman to medal in Olympic swimming.

At The Black Sportswoman, we highlight (or we will again soon), the Black women athletes in sports history, who are often overlooked despite their contributions. A friend and colleague of