Programming note: The Trivia Night that was scheduled for tomorrow has been canceled simply because it didn't generate enough interest. We'll figure something else out next time. If you have any suggestions or requests for a fun paid members only event/hangout, let me know! I'd love to make it happen.

Also, check out the piece I wrote for FiveThirtyEight about The Black Sportswomen in Olympic history titled The Black Women Who Forged New Paths And Set Records At The Olympics.

Now, I want to share some judokas and other Olympic athletes I've found interesting so far this Olympics.

Another day, another Black sportswoman story to fall in love with; this feeling is unique to Olympics season due to the volume of Black women athletes I'm learning about for the first time.

It's really the only good thing to come of the Games.

Last week, I shared that I wanted to watch judo and boxing because so many Black women participate in the event. I haven't watched any boxing.

But, how did I fall in love with judo already? Of course you need skill to be an Olympian, but the sport seems more artistic and technical than what I first thought – like they would just be tackling each other or wrestling or something.

Honestly, I barely know what's going on but I keep watching & wanting to find out out more about the people, the sport, all of it, especially where the Black women are involved.

I tried to join JudoInside's email list, but they don't seem to have one. I've been on the judo Wikipedia page to get an overview. I bet there's some good podcasts. Send any recs my way!

Earlier today, Amandine Buchard won silver in 53kg. In the 63kg category, World No. 1 Clarisse Agbegnenou of France won gold. The competition was a rematch of the 2016 final, and she didn't finish No. 2 again. Watch the highlights and her reaction to winning gold – which means she's now won every major title in her class. She's such a decorated, legendary judoka – check out all this hardware she's won. I became invested once I learned the basics but when I saw that we were both born on the same day in 1992? I'm attached to story and success for life.

There are seven Black sportswomen competing in the category, so below I'm sharing the athletes to watch – and some links to help you get to know them if you don't watch or if you see this email after the fact.

I'll be awake for the Round of 32 – and I'll try to remember to actually tweet (sometimes I get too excited and I don't know what to say so I don't say anything).

Tell a friend to join The Black Sportswoman

They are leaving the Olympics now, but you've probably heard that Zambia's Barbra Banda has been a sensation for the women's football tournament.

I'm most familiar with Sharon Chepchumba, and I love her power, as well as the boldness of setter Jane Wacu and the flair outside hitter Leonida Kasaya. Mercy Moim is captain. This was the first time watching the team play, but you bet I've followed them everywhere possible – included the journalists I noticed covering them.

If you'd like to watch, Kenya plays Serbia at 1:20 a.m. ET on Thursday and Dominican Republic on Friday at 8 p.m.

There's also Italian volleyball player Paola Egonu – whose jumps are insane – and is one of the world's best and well known. I mean, she is sponsored by Armani. Get to know team captain Miriam Sylla.

That's all I have for today – reply or email bria@theblacksportswoman.com if there's an athlete you've learned about! 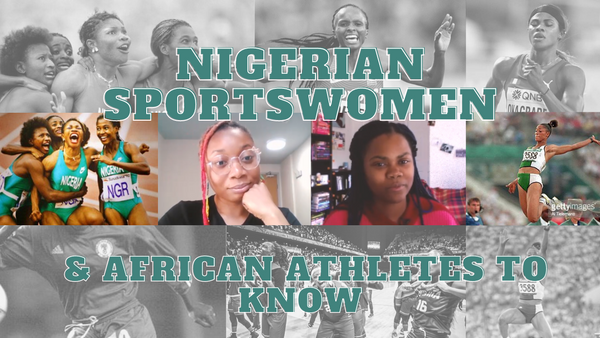 Women's sports in Nigeria, athletes to watch & a vision for the future.

Black sportswomen from around the world to watch at the Olympics.