What a difference a pandemic makes.

In 2016, I was one of those people watching the Olympics. I felt pride watching Black track & field women rocking their braids, weaves or nails, faces shining and draped in the American or Jamaican flags.

But the world stopped last year, and I had a chance to re-think everything. The upcoming Games feel completely different now – and not simply because we’re still in a pandemic.

For one, the event destroys host communities.

Two, I consider myself a “Just 'cause I'm born here / Don't mean I'm from here” type of U.S. citizen, but the connections between nationalism and sports are now enlightening and nauseating, and I expect them to be on full display once again at the Games.

And while I participated in it in 2016, it’s just... complicated. I don’t want to see the U.S. or any specific country win. I wanted to see Black women win.

Women haven’t been on equal footing at the Olympics ever, really. Women didn’t compete at the first Games, and it wasn’t until 2012 that women “competed in all the sports on the programme.” Previously, athletes had to be amateurs – so who would fund their training if they weren’t rich or existed outside of a university setting? That’s just a U.S. example.

Not to mention, the International Association of Athletics Federations (IAAF) can decide who can compete, who is a “woman,” at the Olympics and the International Olympic Committee can just decide not to help – and prematurely end careers.

But we all get excited to watch track & field at the Olympic Games. When else, other than the trials, is professional track & field widely available to watch? When can I watch the Zambian women’s football team? Young Brazilian boxers? Cuban judokas? Sharon Chepchumba and other Kenyan volleyball players? I truly would have no idea how to watch Elaine Thompson, Shelly-Ann Fraser-Pryce or Dina Asher-Smith in July or August of a non-Olympic year.

And when can I get coverage? Yes, knowing how they do the events but also how can I get to know them as people?

As I see increased interest in the ending of the Olympics, I mostly see coverage about the cities. That is valid. But I keep thinking: what about the Black women athletes? For them, this is the dream, the highest level of competition is competing for their nation.

Things are changing in the NWSL, but up until the last year or so, the highest paid U.S.-born players in the league were on the national team. Not because they were the league's best players, but because the federation was paying their salaries.

How will the average track & field, softball, volleyball, or gymnastics athletes, for example, get paid a living wage to compete outside of the Olympic cycle without getting a second or third job?

Whoever wins the men’s football tournament at the Olympics will not be considered the world’s best. Can we undo the idea that the best Black women athletes in the world are the Olympians? That the Olympics is the stage to strive for?

Just because something exists now doesn’t mean it has to exist forever.

Because as I mentioned before, the Olympics are not only flawed but harmful. Alternatives exist for some, but what are the alternatives for Black women athletes? I’m open to further conversation on this topic, so feel free to reply or email bria@theblacksportswoman.com.

But I see two alternatives. The first, is creating opportunities for Black women athletes around the world to not only compete at an elite level in and outside of their countries. Now, there are people working on both of those - as you’ll see with my conversation that’ll publish Thursday with Janine Anthony, who created Ladies March, a publication dedicated to African women’s football.

Another alternative involves creating a landing spot for coverage of Black women athletes around the world. I’ve already reached out to a couple of people, but I’m hoping to do more of that.

In addition to history, I want to bring in more people to help broadcast events that aren’t necessarily easily accessible to someone that doesn’t speak Portuguese, to someone who doesn’t know the right keywords to search in Google to find an event, to someone who wishes they could follow something that isn’t even televised.

I’m all for the Olympics not existing. But I also want an alternative in place for Black women athletes to compete and thrive outside of them.

Black sportswomen around the world need to be considered when developing these new options.

I don’t view these people as just athletes, just laborers, just countrywomen. These Black women feel like my sisters. So for now, I’ll be watching the 2020/21 Olympics while working toward an alternative for the future. 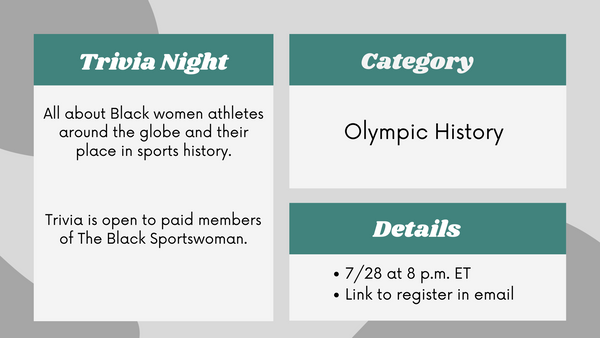 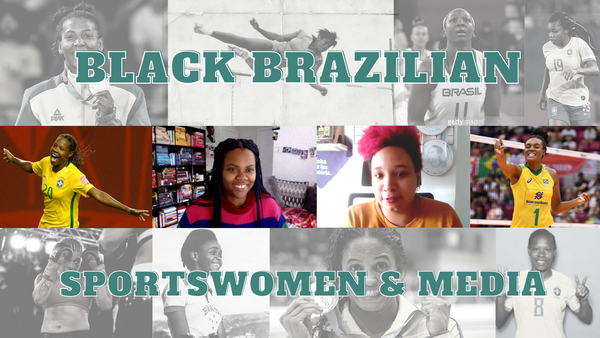