Fencing is considered a "western martial art," so it makes sense that it's caught my attention, given my newfound love of judo.

I think it was two weeks ago, I mentioned I picked up a signed copy of Ibtihaj Muhammad's memoir and around the same time, I listened to this 5-minute podcast episode about Ruth White.

I read a graphic novel this weekend that was all about fencing. Honestly, the story sort of disappointed me, but I think the comic accomplished its goal – got me interested in learning more about fencing. I even watched this 2017 competition yesterday, which felt intense.

Ruth White is the first Black woman to compete at the Olympics for the U.S. in fencing, the first Black person to win a U.S. fencing championship (the Foil title), a national title she won as a 17-year old high school senior.

"I walked into the YMCA and they had a fencing program. It was something different so I tried it," she told the South Bend Tribune, April 11, 1971.

Her parents sent her to the YWCA, to do something, and she took up fencing.

"I was a very aggressive, very athletic kid," she told USA Fencing. "I ran home from school every day – it was about a mile – and I was very strong."

She said fencing saved her from what she described as a toxic environment in Baltimore, Maryland. To compete in the sport, she was forced to focus on keeping up her grades – which helped her leave.

Below is a March 5, 1972 feature written by Froma Joselow in the New York Daily News. It talks about her pre-med studies at NYU, travels and love for ice cream.

"Ice cream is my favorite thing. During the day I know I shouldn't eat that junk, but at night I'm too tired to think about it."

Nikki Franke is an Olympic fencer and the 1975 U.S. national champion in foil. She started the Temple women's fencing team, the first Black woman to coach an NCAA fencing team, and is the co-founder of the Black Women in Sport Foundation.

She is still the only Black woman to lead an NCAA fencing team, according to Temple.

She took up fencing because she wanted to try something new, before she graduated from high school.

"They think of Zorro and people fighting up and down stairways, but fencing's not like that, it's much more refined. You're not out to kill the other person. You're out to outsmart them," she told the Philadelphia Daily News in a May 7, 1976 article ahead of the Montreal Olympics.

The team finished fourth at those Games and Franke was defeated in the first round of individual competitions.

"I'm definitely better what I showed in Montreal..." she told Lena Williams of The New York Times in August 1976. "Lack of experience was our biggest opponent."

She told Williams she hadn't decided on the 1980 Games, due to time constraints as she was already coaching at Temple. But she eventually qualified for the team, though the U.S. boycotted those Games and withdrew the Olympic teams.

"Nobody knows who Nikki Franke is. Very few people know what fencing is all about."

Laura Flessel-Colovic is a French épée fencer who has won the most Olympic medals of any French sportswoman (5). That includes two gold, one silver and two bronze along with numerous world and European championship medals.

Her nickname was "The Wasp," – or La Guêpe – because of her swiftness, competitiveness and the way she displayed them. She is the "the first tricolor Olympic champion" in the épée weapon, having won gold, silver and bronze in the event.

She went on to be appointed France's Minister of Sports.

Unfortunately, I don't know French and can't translate any quotes, but there is a 35-minute interview and a 31-minute interview available (no subtitles) on YouTube along with multiple videos of her competitions.

Below is a AFP/Getty photo from one of Flessel-Colovic's competition.

Thank you for reading and being a paid subscriber of The Black Sportswoman!

Here are 10 Summer Paralympians to know, and their contributions to sports history. 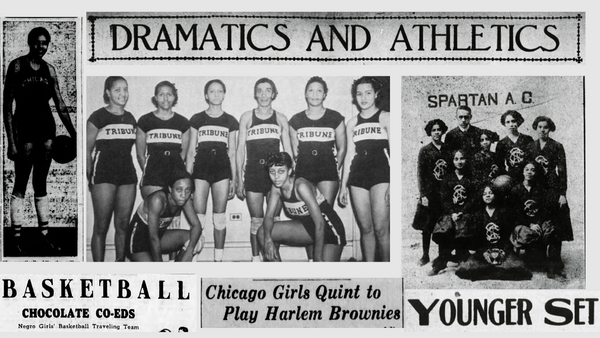