Crystal Dunn wants 2021 to be the year of Black women in soccer.

She shared that thought with the Black Women’s Player Collective recently, saying she plans to be her peers’ biggest cheerleader in both playing the game and gaining visibility.

“I do want this year to feel like people can finally be seen for the first time and they're not just happy to be a part of the sport,” she said. “(I'm) trying to empower other Black women to feel comfortable in their skin and existing in a space that’s not necessarily created for us. But we're here and we are not going away.”

Dunn began preseason training last week with the Portland Thorns and is now in Florida for the 2021 SheBelieves Cup with the U.S. women’s national team.

But one of her biggest priorities is advocating for Black women in soccer, including herself. She changed agents, looking to find marketing and branding that matched her uniqueness. She requested a trade from the North Carolina Courage to Portland Thorns (NWSL), and is more vocal than ever about the issues she’s passionate about.

“This year I really hope that I can feel and live my most authentic self,” she said. “Because I think for a long time I was just happy fitting in.”

Get these stories sent directly to your inbox. Subscribe to The Black Sportswoman's newsletter.

Though she’s on the road at the moment, Dunn has finally settled into her home in Portland where her cat likes following her around the house, where she intentionally takes time to mentally step away from soccer.

She likes reading mystery or crime novels –  though her most recent read is The Year of Yes by Shonda Rhimes – and watches Skip & Shannon: Undisputed, the sports debate show on FS1.

Her newest hobby is taking care of her chickens.

“I'm always looking out the window making sure they're okay,” she said. “And my husband's always like ‘They're fine Crys, they're chickens, they survive, they’re great.’ And I'm just like ‘I want to know (that) they’re not too cold or too hot.’”

Her move to Portland followed a successful 2019 on the field; she won a World Cup title in July and a second NWSL championship in October. But she was without her support system, which includes her husband Pierre Soubrier, the Thorns’ head athletic trainer, who didn't live in the same time zone.

“And I think it started to weigh in on me, and especially in a year like 2019, where I was just battling the expectations for myself and for the national team,” she said. “I was like, wow, I went through that whole year without physically being with any of my family members. At the end of 2020, I realized like, I think winning is so important. But at the same time, I can win wherever I go.”

In Portland, she’ll remain in the attack. For the U.S., she’s a defender. Dunn says she gets the “how do you feel about playing different positions?” question almost daily.

While she feels the most authentic playing further up the pitch, she isn’t against playing on the backline but doesn’t prefer it. That's something she didn’t always share, wanting to be a team player.

“But at the same time, no one else has to deal with this exact issue,” she said. “When I go into national team camp, everybody is playing the position that they get to play and that they play outside of camp as well. Whereas, for me, I stepped into camp and I almost have to transform into another player.”

Her game at its best, she says, involves her in the middle of the pitch, creating and distributing, drawing players to her and setting up her teammates for a goal.

“I think I'm at my best when the ball’s at my feet, when I have space to run, when I can be creative, when I can just play as freely as possible.”

At the University of North Carolina, Dunn won the Hermann Trophy, a NCAA championship, and the U-20 Women’s World Cup before becoming the No. 1 pick in the 2014 NWSL draft. In 2015, she won the Golden Boot, setting a goals-per-game record, and was voted the league's MVP, the youngest player to win the award.

After being left off of the 2015 World Cup roster, she stopped trying to prove herself and focused on what she could control and improving her game.

“I just kept saying to myself like, ‘Crystal, you're great. You're a great player, you're a great teammate. If a coach doesn't choose you, that's on them, but the last thing that you want is to not be the player that you are trying to be and missing out on a roster because you're trying to be somebody else.’”

Now at 107 appearances for the national team  – and a lock for any team roster for the foreseeable future – she’s motivated by her parents and their decision to move from Queens to Long Island. She doesn’t believe she’d be playing soccer if her parents hadn’t done that. As a starter for the national team, she also wants to become visual representation for Black girls and women who want to get into soccer.

She’s also passionate about the game itself, creating opportunities for those whose families’ can’t afford to keep them in soccer, and empowering other Black women in the sport to be elite.

“It took me a while on the national team to really feel like I stand and believe in something, because a lot of the time when I was young on the team, it was just about surviving and making it from one training to another training,” she said. “Here was a moment in time where I was trying to just lift myself up. I couldn't even think about helping others, because I was like ‘I don't know if I'm gonna be here tomorrow, and I don't know where I stand on this team.’

"But I think I've really enjoyed empowering others to be at their best, and believe in all the great things that they believe in. And I just, yeah, it's been an incredible journey.” 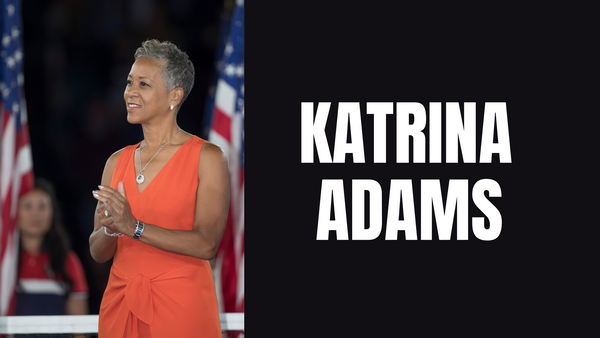 Katrina Adams' shares stories of her playing and corporate career in her new book, which also highlights Black tennis history.

How you can support The Black Sportswoman.