The program she created, Federal City women’s basketball (which is now the University of the District of Columbia), hit a No. 1 ranking without a gym, dorm, campus or uniforms.

“The Pantherettes, as the team was known, either lived with members of Stockard’s church or boarded at the nearby YWCA,” according to Newsday. “The team had a Byzantine practice schedule using the gym at several dozen high schools.”

But Federal City beat Immaculata and Maryland in the same year – two powerhouses at the time. *The Pantherettes entered the 1974-75 season with a national ranking, though were they the first Black team to do so in the mainstream rankings? It’s possible, and honestly highly likely, but I need to look at a few more newspaper clippings to know for sure. The lack of documentation sometimes overwhelms me.

In more exciting news, in 1998, Ta-Nehisi Coates wrote the story of the team's rise to prominence, sharing so many details and insight from former players and Stockard, including how much work went into building the program.

The Pantherettes qualified for the 1975 AIAW tournament, but despite their good record and national ranking during the season, they were ranked low for the tournament and were paired in the opening round against Delta State, the reigning and eventual repeat champions that year.

The players believe it was done on purpose, to prevent a Black AIAW champion. They still took Delta State to overtime, losing by two, and beat Queens College in double overtime before falling to Wayland Baptist in the third round of that consolation bracket.

Jennifer Mitchell was a star of the 1975 AIAW tournament, but her playing time was limited due to a breathing disorder. (Stockard took her to two doctors who verified she could play, though with guidelines.) Mitchell started her high school basketball team, even scoring 60 points in one game, a 40-year record on Long Island. In 1977, Mitchell passed away at 22.

“She had so much energy,” Stockard told Newsday. “She was so agile and she had strength and tenaciousness. She would fake you, going right and left and the ball through the legs and the head fake. And before you knew it, she had gone by you and made two points.”

In 1976, Stockard served as an assistant coach on the U.S. women’s national basketball team, likely sparked by the successful program she built, if the modern coach picks are any indication.

Despite her success, she wasn’t celebrated at Federal City, where she was fired at least three times. She’s described as a fighter, which players seemed to love while administrators felt the opposite.

In 1984, players threatened to boycott Stockard’s firing. A quote from Diana Bushrod shows how important she was to the program and the athletes.

"I feel that the reason they want to get rid of her is that she stands for what is right for women athletes. If she leaves, I don't know what will happen to women's sports."

She grew up in Nashville, eventually attended Tuskegee University on a basketball scholarship.

The Tuskegee connection continues, and it makes me wonder what inspired if she learned about the Abbott approach or Tuskegee Method while there.

"It's a job to me. If I was coaching on the high school or elementary level, it would be the same. My goal is to have the best team with the best record," Stockard told the Washington Post. "To me its' full-time job - you may say it's full time job, part time job, a part way job - but I consider it a full time job. I don't weigh a job for minutes or hours, for if that was the case, I would feel I wouldn't ever get paid." 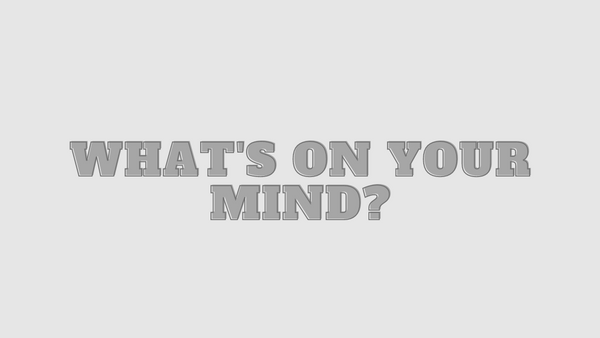 I haven't done this in a while. What's on your mind?