In high school, she played 3-on-3 half-court basketball before graduating in 1977.

The point guard started her college career near home at Roane State Community College in Tennessee, then moved to the University of Georgia with her coach, Andy Landers, was hired in Athens. Her junior and senior seasons were played in Athens.

She remains in the record books – at a school as successful as Georgia – despite only playing two seasons. After finishing her eligibility, she became a grad assistant and academic counselor, working with the team during Elite Eight and national title appearance seasons.

According to NJCAA, Locke “also established herself as a top recruiter by bringing in sought-after talent to Georgia, including Hall of Famer Teresa Edwards.”

Support The Black Sportswoman by becoming a paid member.

She became a full-time assistant on Andy Landers team from 1985 to 1990. She got to work with and coach Janet Harris, Saudia Roundtree, Teresa Edwards, Katrina McClain, coached during conference regular season and tournament championships as well as a Sweet 16 run.

“I refer to Bernadette as the first lady of Georgia basketball,’’ Landers said. “She meant everything.’’

UGA’s women’s basketball team gives out the Bernadette Locke Award, given to the player "exemplifying integrity through her actions."

After spending a decade in Georgia, Locke was hired by Rick Pitino as an assistant coach on his men’s basketball staff at the University of Kentucky. She was the first full-time woman to work as an assistant in Division I NCAA men's basketball.

Every time an NBA assistant role opens up, for example, Becky Hammon is mentioned, and the name Bernadette Locke Mattox is mentioned, as a footnote almost, calling her a trailblazer in the area of women coaching men.

If you want to learn more about that era in her life, the SEC Storied documentary “Coach Bernie” is airing Friday at 2 p.m. ET if you have SEC Network, or you can watch it for $2.99 here. I haven’t watched it, but I’m (cautiously) hoping it discusses her youth, playing career and how she helped develop the University of Georgia women’s basketball program so I can learn more about her.

After four years working on the men’s basketball team, Mattox transitioned into a role as assistant athletic director where she spent one year.

She served as an assistant to Nell Fortner on the USA national basketball team during the 1998 FIBA World Championships where they won a gold medal. After leaving Kentucky in 2003, she worked with the Connecticut Sun from 2003 to 2012.

I’m not sure what she is up to now, and let me know if you know. A 2013 interview says she left the Sun to send her son off to college. I would love to interview her.

“I’d like to get back into administration,’’ she said. “I enjoyed that part. Coaching? I won’t ever say never.’’

No matter what she chooses to do next, her impact on the game of basketball is felt.

“We all owe a great deal of gratitude to Bern because she was in the trenches long before many of us knew we wanted to coach,” said University of South Carolina head coach Dawn Staley.

Plus, what I've been researching lately. 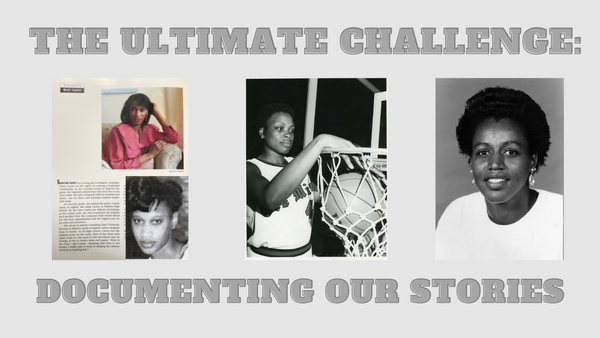 Plus, two athletes to know.